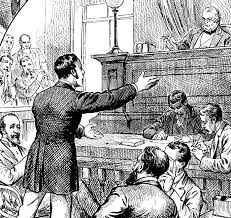 S.Ct. DoJ Briefs  This site seeks to provide convenient access to all briefs (other than responses in IFP cases) filed by the Solicitor General.

S. Ct. Findlaw Briefs  Before presenting their oral arguments, counsel for both sides will submit a legal brief summarizing the facts of the case as well as the legal reasoning behind their arguments. Cases set for hearing during the current Supreme Court term, for which FindLaw has online versions of briefs, are listed in alphabetical order by case name. Covers 1999-2007.

Anti-Defamation League  The Anti-Defamation League ("ADL") was founded in 1913 to combat the anti-Semitism and discrimination against Jews that was prevalent at the time. Fairly soon after its establishment, ADL's mission expanded to include the eradication of bias and discrimination against people of all races and religions.  ADL has filed amicus briefs in cases involving issues that range from the separation of church and state to racial discrimination to censorship. Summaries and copies of some of the most significant briefs ADL has filed may be accessed through the links on this page.

ACLU  This site includes ACLU and Supreme Court cases dating back to 1994, legislative update searchable by issue and region, and activism tools in the Take Action Center.

CATO Inst.  The Cato Institute is a public policy research organization, a think tank, dedicated to the principles of individual liberty, limited government, free markets and peace.  Its scholars and analysts conduct independent, nonpartisan research on a wide range of policy issues.

Children’s Rights  A national advocacy group working to reform failing child welfare systemson behalf of the hundreds of thousands of abused and neglected children who depend on them for protection and care.  Through tough legal action complemented by substantive policy expertise, they have won landmark victories and brought about sweeping improvements in the lives of abused and neglected children in more than a dozen states across the nation.

Electronic Privacy Info. Ctr.  EPIC is a public interest research center in Washington, D.C. It was established in 1994 to focus public attention on emerging civil liberties issues and to protect privacy, the First Amendment, and constitutional values.  EPIC publishes an award-winning e-mail and online newsletter on civil liberties in the information age - the EPIC Alert.

Famous Trials-Linder  Prof. Douglas Linder's updated Famous Trials website, featuring famous trials from around the world, from the ancient world to the present.