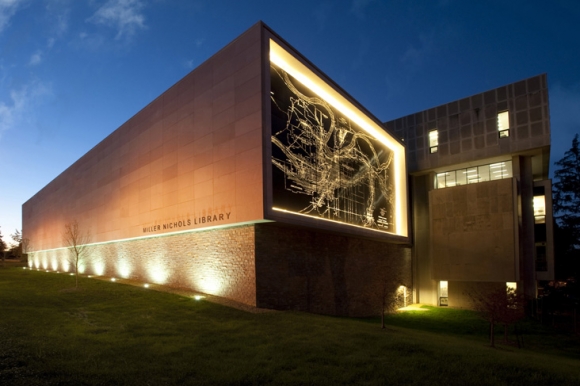 "Our new library has been long-needed, long-awaited. In now occupying it, we feel it marks a day when we can open the doors of the mind as we open the doors of the building. Crowded conditions and inconvenient arrangements may have tempered our souls in the past, but in the future, spaciousness and quietness will enable us to think larger thoughts as we turn to various media for information we need and to the printed page for the distillation of the best of other men's thinking." - Dr. Kenneth J. LaBudde, The Dedication of the General Library, 1970

The photo above shows the library as it stands now. The illuminated screen is a decorative element of the robotic storage addition, featuring a historic map of the "Rivers, Rails, and Trails" in Kansas City.

The university library had been experiencing an acute shortage of space for several decades when a new structure was finally built at 51st and Rockhill. It was dedicated as the General Library in 1970. The planned building had four floors, with structural provisions for a fifth. The first three floors were completed and occupied when the building was dedicated in 1970. It remained unfinished until space shortage issues arose again, and a $1.5 million donation by Miller Nichols made the completion of the fourth floor and the addition of the fifth possible. The library was subsequently rededicated as Miller Nichols Library in 1991. When the General Library was completed in 1969, the library and all its collections were located in the center of campus for the first time since it was housed in the Administration Building (now Scofield Hall). Bibliographic instruction was gaining importance in academic libraries at the time, and the UMKC library's Bibliographic Instruction Program helped students both to gain access to library materials and to become familiar with the expanded holdings in the new library, as well as the recently accessible collections that had previously been housed outside the library.

Miller Nichols Library began a major renovation and expansion project in 2008. The project included building an automated storage and retrieval unit, known as the Robot. The Robot was completed in 2010, and stores over 1.9 million items of the library collections in a compact and controlled environment. The phased project will result in renovation of all five floors of the library to create spaces better suited to the technology and study needs of students. Construction of the learning center addition started in spring 2012, and was completed in fall 2013, adding classrooms, a lecture hall, and a new entrance to the library. Significantly, the new entrance to Miller Nichols Learning Center faces the center of campus, restoring the convenient access that was lost in 2008 when the old campus-facing entrance was closed for the construction of the Robot. As of 2019, the first and second floors of the library have been fully renovated. A new suite was completed for LaBudde Special Collections in 2017, moving it from the fourth to the third floor, creating a spacious reading room, new offices for library staff, and access to the Robot for safe material storage. In 2019, the Sunderland Foundation provided the funding needed to complete the third floor, leaving the ground and fourth floors to be renovated.