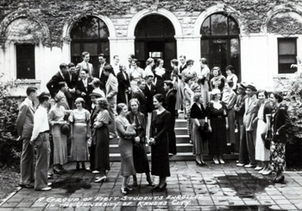 Students in front of the Dickey Mansion on the university's opening day, 1933.

In 1923 a University Committee reported to the Board of Directors of the Kansas City Chamber of Commerce a plan for the organization of a city university. The project was put off until public support could be raised, and then complications arose concerning the location of the university. The widow of Dr. Calvin B. Hewitt, former President of the Kansas City Dental School, offered a gift of land to the Methodist Episcopal Church to be used for a Christian university, leading to a separate movement for a university in Kansas City. Ultimately, the two groups came together to found the University of Kansas City. And so, the University of Kansas City was established in 1933, the result of citywide support and cooperation. The nation was in the midst of the Great Depression, but Kansas City had a vision for itself that included the founding of the new university, the Kansas City Philharmonic orchestra, and the William Rockhill Nelson Gallery of Art and Atkins Museum. Kansas City philanthropist William Volker bought the William S. Dickey Mansion and donated it to the university. When KCU opened, the three-story former Dickey residence served as the central university building, housing administration, classrooms, and  the library, which was in a large wood-paneled room with a fireplace on the first floor with the stacks in the sunroom. The space was quickly outgrown, and a new library was built with a $50,000 gift from William Volker. It opened in 1946 under the supervision of the university's first librarian, Marjorie Copeland.

The library's original collection was purchased from the Horner Junior College of Kansas City, and contained approximately 2,500 volumes. By 1936 the collection had grown to 4,500 volumes, selecting from published collecting aids for basic university library holdings, and miscellaneous gifts. In 1937 the library acquired the Snyder Collection of Americana, as a gift purchased by William Volker. The Robert M. Snyder, Jr. Collection formed the basis for the library's Special Collections department. It focuses on the 19th century Trans-Mississippi West experience, particularly in the areas of Missouri and Kansas history, Native Americans, Mormons and frontier religions, transportation and the cattle trade. It also includes smaller collections focused on local history and politics. In 1946 the Linda Hall Library of Science and Technology purchased the entire collection of the second-oldest scientific society in the United States, the American Academy of Arts and Sciences in Boston. The collection contained 62,359 items, including books dating back to 1480, and original works of Copernicus, Galileo, and Newton.  The University of Kansas City transferred their science collection to Linda Hall Library, and until the late 1960s when the health sciences campus was established, it did not collect in areas covered by Linda Hall. 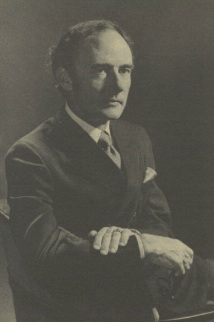 The library had five directors before Dr. Kenneth J. LaBudde, the most influential director, and the longest holder of the office.

LaBudde held the directorship for 30 years. He was instrumental in achieving academic status for the professional librarians in 1971. This development at UMKC was concurrent with changes occurring in the field of librarianship nationwide, including a new focus on personnel instead of just services. The UMKC Librarians' Council was also created at this time to give librarians a way to participate in campus affairs. LaBudde was also deeply involved in the planning of the new General Library building. Its modular structure and open plan were influenced by LaBudde's interest in library architecture, and the arrangement of materials was his design. It was first arranged in subject blocks with different disciplines on different floors, but he later decided to rearrange the different library departments by function. The UMKC Friends of the Library group was formed in 1965 as a result of relationships LaBudde cultivated throughout Kansas City's citizenry. The organizations raised funds, procured gifts and endowments, and gave annual gifts to the library for the development of specific collections. The Friends of the Library remain an important supporter of the UMKC library today. In 2002 the university library's Special Collections Department was dedicated in honor of Dr. LaBudde, and it now bears his name. The department received LaBudde's personal collection from his estate in 2000. It contains materials relating to his education, correspondence, and travel journals.